This article will be exploring the validity of green roofs and their different types. This article also analyses the benefits of a green roof and what clients need to consider before investing in one.

A green roof is a structure that is either partially or fully covered with live vegetation, typically planted above a protective plastic membrane. Green roofs are an innovative way of integrating flora into the surrounding environment whilst also enhancing the architecture by making something useful out of a space that, generally, is overlooked. They vary in size and complexity and can be installed on new builds or existing structures.

The phenomenon of green roofs originated in Germany in the 1960s. Compared to the third world countries, the UK was a latecomer to welcoming the concept of green roofs. Currently, in England, green roofing has grown in popularity, and there are around 700 green roofs in central London, covering an area of over 175,000 m2. A common global consensus over green roofs is that the sole incentive of using them is their aesthetic appeal; this is not the case.

In recent years, there has been a shift in mentality as the public are slowly coming to terms with the ecological and energy-efficient properties of constructing green roofs in towns and cities across the globe. In a new initiative in Barking, East London, the local council is planning an extensive redevelopment that includes 40% of the buildings having green roofs. According to the Sustainable Design and Construction supplementary planning guidance, Boris Johnson has committed to cover 5% of the capital’s roofs with flora by 2030. Construction has already commenced at West Ham bus station [see image below] and St James’ tube stations in London. 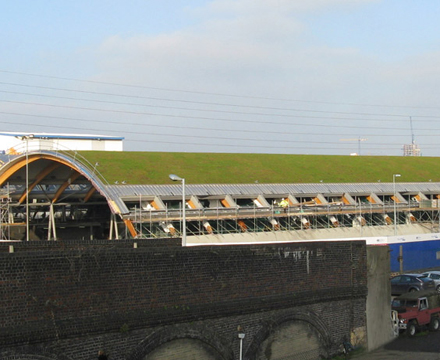 Intensive green roofs, formed of deep substrates, provide large scopes for design and support complex gardens on concrete structures. There are many benefits other than the increase of market value in buildings; there is increased birdlife on rooftops, with the attraction of more insects, greater absorption of dust particles, an increase of thermal insulation, and thus the cooling of buildings. Intensive roofs tend to be more suited to larger builds given the greater total weight of the installation. It is, however, possible to make structural improvements to an existing roof structure to accommodate an intensive roof. This option is ideal when the primary motive for installing a green roof is to absorb water and improve the roof’s life expectancy – extensive roofs are not designed to allow cover from the elements. 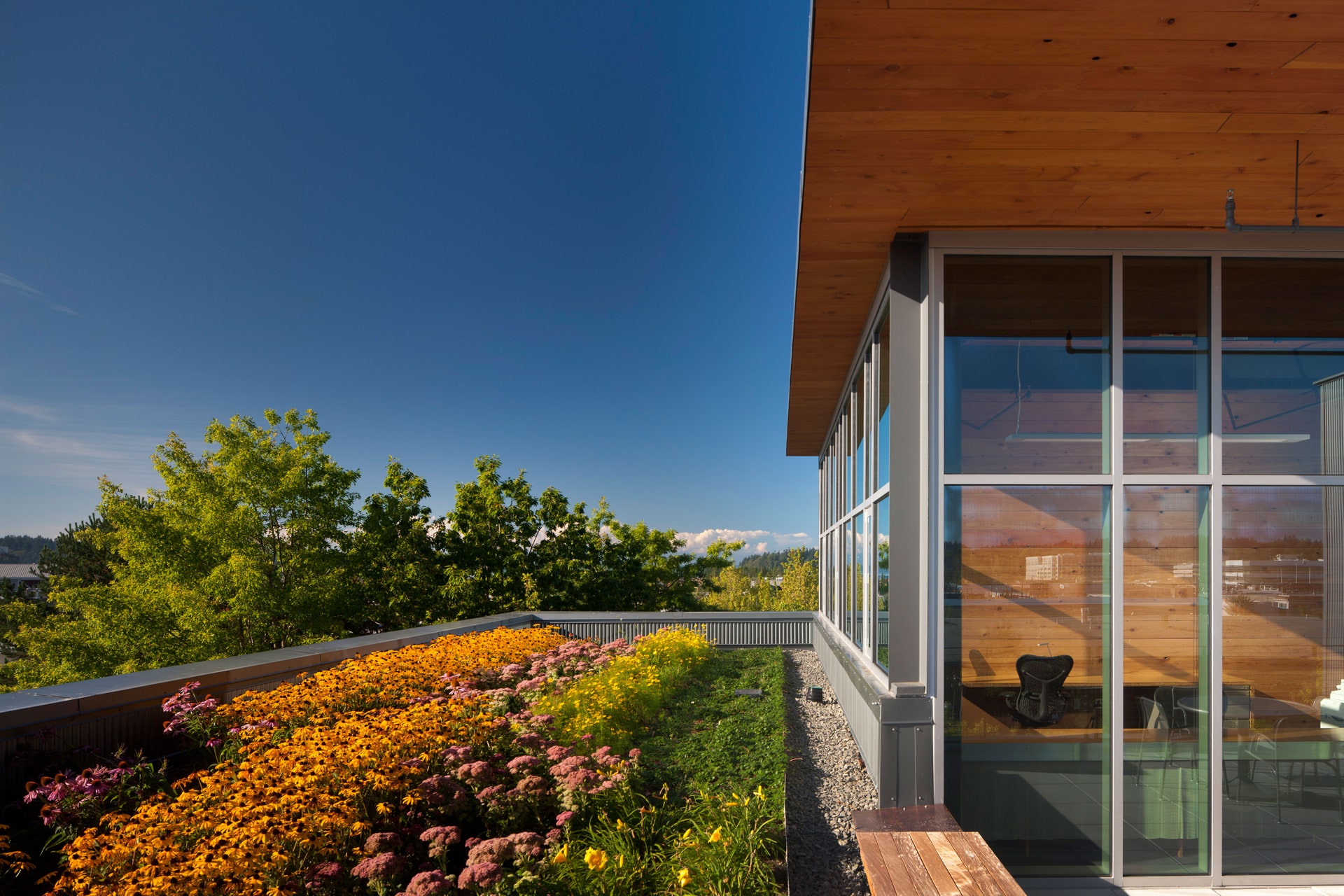 Extensive green roofs are known for their ability to withstand adverse and extreme weather conditions, such as wind or snow. Moreover, they are a popular choice for their biodiverse traits, whereby they can be adapted to mimic the natural habitat of a given animal, bird, or insect.

The distinction between these types lies in the depth of the material installed on the roof. Commonly, extensive roofs are 100 to 150mm thinner than intensive roofs. Given their shallowness, extensive green roofs are normally used for visual and environmental characteristics rather than functioning as accessible roof space. This type of green roof is simpler to fix and requires substantially less maintenance than intensive installations. It is a highly versatile roofing solution, appropriate for new-builds and retrofits alike. The vegetation is pre-grown and prepared in pads, meaning they are easily transportable to the installation site.

Has your green roof project been approved? Email us at info@blueengineering.co.ukwith your architect’s drawings, and we can give you a quote for the structural engineering works.

From a structural engineer’s perspective, green roofs are fairly simple to design and can be fitted to most buildings with a suitably flat top. The standard designs also account for a 20-to-30-degree roof slope. Most green roofs consist of the same basic elements; a waterproofing layer, a layer of soil, and the vegetation of choice on top. 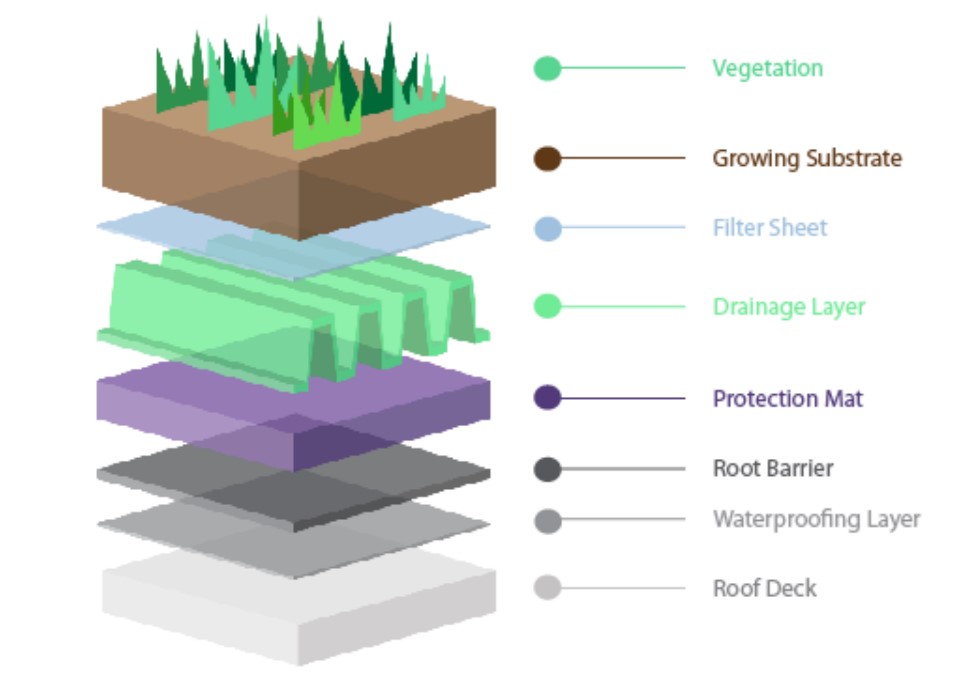 Design engineers consider the dry weight of the living vegetation and how much it will weigh once fully saturated. At Blue Engineering, we typically allow for 1.75kN/m2 of dead load for a green roof, however, this is subject to confirmation by the project’s design engineer. Both the viability and the cost of installing a green roof is influenced by additional loading. If a green roof is included in the initial design of a building, the additional load can be catered for easily. On the other hand, if a green roof is to be installed on an existing building, the design will be restricted to the carrying capacity of the existing roof – unless the client is willing to enhance the structure.

Generally, most roof decks can accommodate green roofs under the condition that they can support the dead and imposed load. It is important to note that intensive green roofs should only be constructed on concrete decks. The dead and imposed loads are calculated following Eurocode design data, specifically, Eurocode guides 1,3 and 4 which focus on the actions relating to steel and concrete structures. Eurocodes are a series of multiple European technical standards that provide a common approach to the structural design of buildings and other civil engineering works. Eurocodes help keep engineering design consistent and act as the formal language of the engineering world.

The shear forces are considered for roofs that are pitched more than 10 degrees, varying with the levels of substrate used and the vegetation chosen; anti-shear measures will be adequate to the individual system at hand.

During the design process, the location of the green roof plays a critical role. This is decided based on several factors like the height of the roof, its wind exposure, the orientation to the sun and shade during the day. Further, views to and from the roof may contribute to where certain parts are located for optimal effect and benefit.

If the roof is flat, the engineer may choose to design a green roof to have a protection board, or the installer may choose to fit a protection board that covers an existing roof. Over this, a waterproof membrane will be fixed. The purpose of this layer is to prevent the plant roots from spreading down into the roof. This is also mitigated by a filter layer, a drainage layer, and a water retention layer. All of these ensure that water and nutrients spread evenly across the garden. On top of the waterproofing layer, especially for intensive green roofs, a root barrier is key as it prevents roots from damaging the structure. The barrier is usually made of a polythene plastic membrane. To overcome issues arising from excess rainwater like structural and root damage, the drainage layer must be adequate to safely drain the water away. Above that comes the growing layer, which comprises a mixture of porous material and soil. This combination allows for the lightest possible medium for the plants to grow and thrive in the long term. Finally, there are the plants.

To achieve stability in the process is one set goal, as negative pressure forces arising from excessive wind conditions are counteracted by the weight of the green roof system. Wind may further cause erosion issues on exposed sites and is more likely to arise when plant establishment is in the early stages.

Overall, these structural factors are to be considered in ensuring successful implementation:

If you are considering a green roof on your property, you can email us at info@blueengineering.co.uk to find out more about what we can do for you.

The angle or pitch of the roof is a potential design limitation when considering installing a green roof. Most green roofs tend to be flat, though it is feasible to install a green roof on pitched roofs. If the angle of pitch exceeds 20 degrees, the green roof is designed similarly to a green wall.

Given that the heavier intensive green roofs can have increasingly intricate installations, featuring mediums with gravel, paving slabs, safety barriers and garden furniture, these involve substantial structural improvement for the roof to carry the weight of the installation. In some cases, green roofs may also require temporary works structures to be installed, depending on the complexity of the job in question. This may lead to an increased cost, especially when the temporary works phase makes use of steel and concrete elements. It is for this reason that appointing a specialist design engineer is imperative when considering installing any kind of green roof.

Regardless of the size, pitch or build, all green roofs will require exposure to sunlight, water, and the necessary nutrients to prosper. Where a building’s roof is shadowed by a nearby existing build, the installation of a green roof is not advised. Throughout the installation process, it will be necessary for the installers to gain access to the roof. If access to the site is restricted, it could heavily increase the time and cost required for completion.

Are you considering a green roof on your property?  Call us on 020 7247 3811 to book a site visit.  We can assess your property to deem whether it is suitable. Alternatively, you can email us with your query at info@blueengineering.co.uk

A general summary of green roof advantages is that they supply a rainwater buffer, add purity to the air, reduce the surrounding temperatures, regulate internal temperatures, contribute to energy efficiency, and incentivise biodiversity in the area. 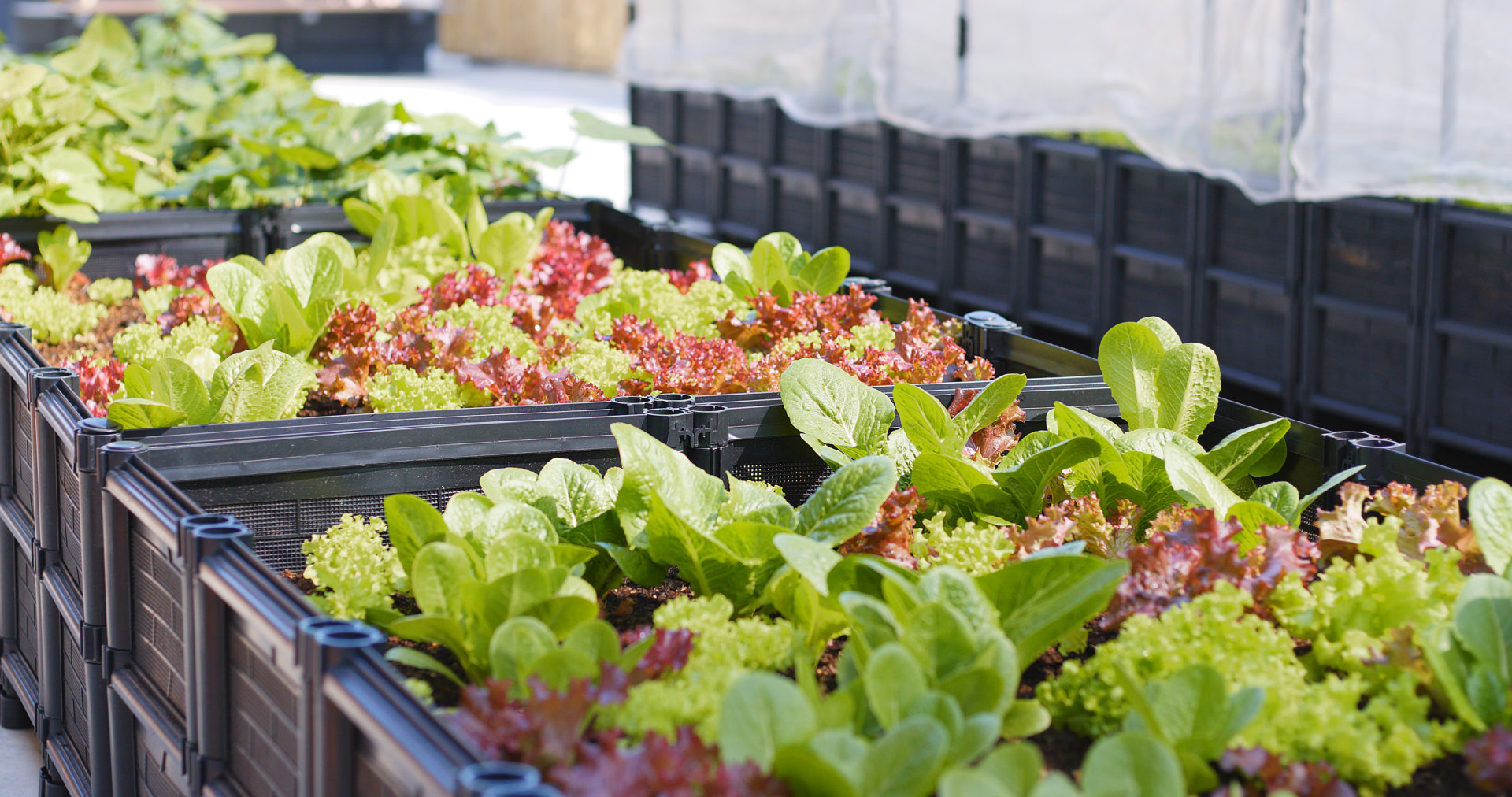 The benefits of green roofs tend to increase with greater substrate depths – hence why intensive green roofs are favoured by clients who are driven by an environmental stance. This is a result of the wider array of vegetation that can be grown as well as the increased water retention in the soil layer. Listed below are the prominent ecological benefits of green roofs:

As per UK building regulations and guidelines, green roofs do not require planning permission before they can be constructed. However, it is highly advisable to inform the local council before any major external renovation.

A green roof does, however, require a Building Regulation Approval Notice application. This involves the local council completing a full inspection of the property to ensure that the addition of a green roof does not hinder the safety of a building.

With its growing demand, Blue’s engineers are fully trained to design green roofs following Eurocode standards. Green roofs are an innovative way of enhancing the architecture and integrating flora into a space that is generally overlooked. Green roofs are split into two main principal types, intensive and extensive. Intensive roofs are more suited to larger builds given the greater total weight of the installation. Extensive green roofs are known for their ability to withstand adverse and extreme weather conditions. They are beneficial in adding purity to the air, reducing the surrounding temperatures, regulating internal temperatures, and much more.

For any further information on green roofs, get in touch. You can email us with your query or your architect’s drawings at info@blueengineering.co.uk

View all posts by Pallika Sood